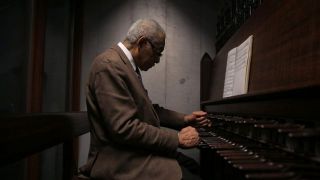 It is Sunday morning, and Dionisio A. Lind cannot find the balm in Gilead.

He is not looking for salvation, just the sheet music for the spiritual “There Is a Balm in Gilead.” The person who tidied up Mr. Lind’s office during the week has organized things in a way he cannot make sense of. “God, I could kill him,” Mr. Lind says.

This from a man who is high up in the church — literally. If God inhabits the firmament, Mr. Lind’s workplace puts him closer to God than the ministers, the choir and the congregation at the Riverside Church, where he is the carillonneur. His job is to play the huge bells in the church’s tower, a tall Gothic landmark in Morningside Heights in Manhattan.

From a wooden console nearly 400 feet above the sanctuary, Mr. Lind summons worshipers on Sunday mornings and sends them home after the 10:45 service. On this particular Sunday, he wants to send them home to “There Is a Balm in Gilead” — and he does not want to have to play from memory, even though, at 84, with more than 60 years of experience, he surely could. 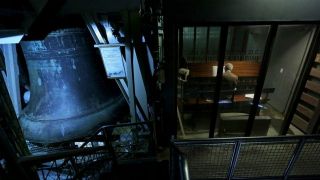 So the search for sheet music is on in his office, unseen by the worshipers in the sanctuary 21 floors below. They sing the opening hymn, “How Firm a Foundation.” Mr. Lind searches while a video stream of the service downstairs plays on the computer in his office. The congregants recite the call to worship. He searches. The gospel choir performs the anthem “Justice and Mercy.” He searches some more.

Playing a carillon is different from playing bells with ropes, one by one. That is known as change-ringing: Paul Revere was a change-ringer at Old North Church in Boston. In 2006, Trinity Church in Lower Manhattan became the first change-ringing tower in the United States to have 12 bells, the heaviest of them weighing 1.35 tons. It takes 12 people, each pulling the rope on a different bell, to ring a peal.

At Riverside, there is only Mr. Lind for an instrument with 74 bells, including what the church says is the largest tuned bell in the world, a monster of not quite 20 tons that measures 122 inches in diameter and plays the lowest note, a deep F. It, and the other bells, are anchored to a structure of thick gray beams and girders, a metal skeleton reaching high inside the tower.

“That big bell is hard to start and hard to stop,” Mr. Lind says. “Twenty tons.”

The search continues. He finds music by Johann Sebastian Bach and by the 19th-century French composer Léo Delibes. Not what he is looking for.

Mr. Lind performs on a console in a glass-walled space that one early description of the carillon called the “clavier cabin,” which sits even higher than his office on the 21st floor. The elevator does not go to the clavier cabin. To get there, Mr. Lind climbs industrial-style metal stairs and shuffle-steps across a catwalk, a trip that one of Riverside’s ministers likened to an ascent of the Statue of Liberty’s crown. The minister pants when he makes the climb; Mr. Lind does not. 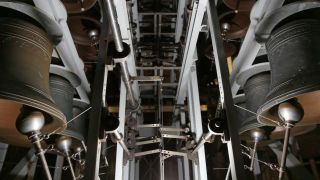 There can be a visual payoff, but not on a rainy day like this one. Metal shutters above the arches in the tower roll down in bad weather, blocking a New Yorker-cover-worthy view of New Jersey and preventing weather damage to what the Guild of Carillonneurs in North America says is one of just three carillons in Manhattan.

Mr. Lind’s console in the clavier cabin has pedals like an organ, but it is not outfitted with keys and stops; instead, it has wooden levers that are sometimes called batons. The carillonneurs’ guild says that playing the instrument is like playing a piano more than an organ, because the mechanism in a carillon is responsive to a carillonneur’s touch in ways that an organ is not. Mr. Lind can strike a baton with a balled fist if he wants a particularly loud, piercing sound. There is no power steering. That kind of playing demands strength.

It is percussive. Has he ever tried playing drums? 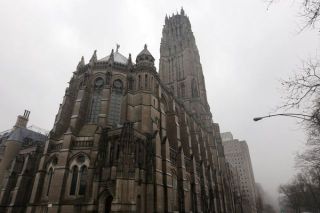 Like Mr. Lind, the instrument at Riverside spent its early years elsewhere. It first resided in the Park Avenue Baptist Church; it was moved in 1930 as the Riverside Church was being completed. It was a gift from the oil billionaire John D. Rockefeller Jr., who commissioned Riverside’s Gothic complex, modeled on Chartres Cathedral in France.

“Gorgeous church,” Mr. Lind says, referring to his surroundings, still searching for his missing sheet music. “John D. knew what he was doing.”

Mr. Lind is going through another stack when he announces, “Found it.” He pulls out the two pages of “There Is a Balm in Gilead.” Downstairs, the congregation sings “Blest Be the Tie That Binds.”

A couple of minutes later, the choir begins its offertory anthem, led by the director of music and organist, Christopher Johnson.

Does Mr. Johnson ever issue orders to Mr. Lind about what to play or how to play it? Suggestions, perhaps? Mr. Lind shakes his head.

“He says, ‘Do what you want to do,’ ” he says before heading to the stairs and the balm that comes from pounding and pummeling his beloved batons.